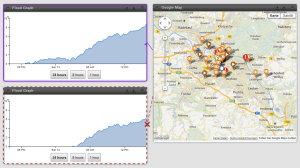 Mashups utilizing publish-subscribe-based inter-widget communication approach do not require users to establish connections between widgets explicitly. Communication, i. e. data and control flows emerge as soon as widgets are put together in a workspace (so called choreographed user interface mashups, cf. [1]). Technically, this is achieved by employing the event-driven approach via publish-subscribe messaging pattern (pub/sub): widgets autonomously subscribe and publish messages on different communication channels, so-called topics. A message bus running within a browser takes care of delivering messages to all interested parties, i. e., widgets subscribed to the corresponding topics.

This, however, implies a lack of awareness and control by end users - an implication which was confirmed in the interviews and observations during the user studies [2]. A profound analysis of the described problems, analysis of possible solutions from related research fields and implications for the PubSub-based systems can be found in the corresponding paper [3].

This paper presents an approach to extend choreographed mashup platforms towards so called hybrid ones. We show, how the emerged inter-widget communication flow can be visualized and how users can be enabled to adjust it.